The Father in Me
Lee Bey
The Dream
I walk into the kitchen. My father is there, dressed for work; the afternoon sun, shining golden through pattern of the kitchen windows.
“Daddy,” I say.
“How you doing, Chip?” he said, calling me by the nickname my mother gave me.
“I miss you,” I tell him. “We all miss you.”
* * * * 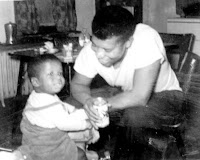 My father was Lee J. Bey. He loved us all. My mother, Lula; my older sisters, Claudette and Deneterius. Our relatives. When I was a small child in the late 1960s and early 1970s, he’d pack our kinfolk in his car and bring them over to our house. The food, the laughter, the music. And my father, handsome and funny, holding court over it all.
My father and I were the only males in a house full of women. We were virtually inseparable. Unless I was at school, or running the sidewalks with my friends, I was with him, picking up the tricks and lessons of manhood.

One lesson I learned: Don’t back down from a fight. Another: Don’t take no mess. When I was about three or four, one of my aunts brought an unruly and disrespectful boyfriend to a party we hosted. My father wound up throwing the man out the door and down the front steps of our house at 7327 South Kimbark. On his way to the pavement, the boyfriend cleared eight wide wooden steps (plus the concrete first step), hit the ground, and broke his ankle.
When I was twelve, I punched out an older bully who tried to steal a ride from my bike. My father smiled when he heard about it. “Sometimes you have to show people,” he said.
He wore his manhood without much bluff or bluster. “You can’t tell somebody you are a man,” he used to tell me. “You are. Or you aren’t.”
I wanted to be just like him. I wanted to be a man.

The Kiss
My father's friends drank, smoked and cursed. They fixed cars and figured stuff out. I was an honorary member of this closed society, even when I was as young as four or five. They called me Chip or “Lil’ Bey,” gave me 7-Up or Canada Dry. I couldn’t have been happier. From my father and his friends, I learned about fraternity, politics, and sometimes, women.﻿
When I was about eight, my father and his oldest brother, George, and I went to see their friend Jimmy. We got there and while the men were greeting each other, Jimmy’s pretty wife pulled me aside, kissed me smack on the lips and told me I had pretty eyelashes. Oh, I was a man, now, I mused to myself.

I silently reveled in the kiss on the drive back while my father and uncle recapped the visit. Then, my Uncle George said with disgust: “Why his wife always want to put her lips on somebody? I didn’t let her kiss me.”
“Me either,” my father said. “To tell you the truth, don’t nobody know where her mouth been.”
Oh no! My eight-year-old imagination conjured images of Jimmy’s wife eating out of garbage cans, kissing brick walls in dark alleys, and licking jelly off the floor when nobody was looking. I couldn’t swallow for the rest of the trip home.
“You okay back there, boy?” one of them would say.
“Ummm hmmm,” I grunted, not wanting to swallow, unable to spit and afraid to tell them that Jimmy’s wife had got me.
Passings

When I got older, my father and I didn’t get along. In seventh and eighth grade, I barely studied and was disruptive in class, got poor marks. During a parents’ conference, he noticed that my seat was separated from the rest of the class.
“My son is sitting in the nigger seat,” he told me. “Nigger” was a curse word in our house, reserved for the black person who refused to behave, who refused to achieve. The remark was meant to sting. It did. I got admitted to a top public high school in 1979 but was still a horrible student, which caused more problems between me and my father...