Dad’s Lesson:
Life Is About Now, Not Then
Donald A. Hayner 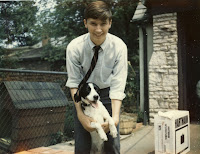 n the morning, I say good-bye to my dad from inside the clean and cheerful confines of the nursing home where he lives. It’s an assisted-living home for Alzheimer’s patients. Mornings are always best. His thoughts are clearest. We’ll sit together, or walk through the gardens outside. I often find myself studying his face. Some days, he looks old and remotely recognizable. Other days, he looks like the dad I remember as a kid, the same guy I saw walking across my high school athletic field thirty-three years ago.
I was a sprinter on the track team, practicing starts, when I heard a teammate say, “Who’s this? Some Olympic scout coming to check me out?”
I looked up and saw my dad. Why wasn’t he at work, I wondered. He was wearing a business suit and trench coat. He was short, built like a bulldog, with a marine’s crew cut and an all-business walk. He gently motioned me to join him.

He didn’t say why until we were inside the family car. Then, he told me my brother was dead. He had committed suicide in his college dorm room. As he drove me home, I looked out the window, away from him, and cried. It was a short ride. I think it was raining.


Walking inside our house seemed a lot different now. My mother was devastated, crying in my brother’s room, lost and bewildered. Friends and family came by, all offering various explanations of my brother’s death. I mostly just stayed in my room.
At one point, I remember my dad sitting in a living room chair. Here was a man who was always fearless, a tough guy who worked in the steel mills for thirty years. As he sat talking, his chest suddenly started to heave with waves of grief from deep inside.

That was the first time I saw him cry.
My father had his share of hurt in life. When he was twelve, he and his brother were rescued from a second-story window as the family house burned down, killing his father. His brother died in Casablanca in World War II. And now he had lost a son...