y father never went on a school field trip. Never came to a football or basketball game where I was shaking my pom-poms in what he still jokingly describes as my little “bobtail skirt.” He didn’t attend the school musical or the play I wrote in high school. When he did come to the school, he usually wasn’t there for me.
Instead, he was helping a single mother get her wayward son back in school. Or he was fighting the local powers that be, protesting to get more black teachers hired for a school enrollment that was increasingly black and a school staff that was stubbornly white. He was often marching off to school board meetings or rallies and organizing the community for another civil fight. Or he was protesting the number of black boys being expelled and suspended—my father’s days and nights filled with meetings and causes and prayer.

My mother was the one who registered me and my brother, Ed, for school. The one who was there for parent-teacher conferences and field trips. She was the one in attendance on Senior Night at football and basketball games, though like my father, she also sometimes stood in as parent for some child at church or one whom she knew from our small-town community. I shared my parents, especially my father. He had scores of son sand daughters, though in actuality my mother gave birth to just two: Ed and me—six years younger. We were PKs, preacher’s kids. My father was pastor of the Morning Star Missionary Baptist Church, the largest African American church in our town of 30,000—and arguably the most influential church.
It was largely my dad—the Reverend William H. Copeland, Jr.—who made it so, a caramel-complected slender man whose politics and hands-on liberation theology were shaped in a Jim Crow Louisiana and in the faith of his father, himself a Methodist preacher. 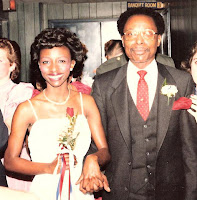 Dad had a sometimes raspy voice that when he stood in the pulpit on Sunday mornings, when it was buttered with the spirit, thundered as he preached. It was the same fire of righteous indignation that I later recall hearing in his voice when there was some injustice he sensed, some new cause to battle, some compulsion or call to help someone in need.
And so his presence in one place meant his absence in another. Such is the calling of a preacher, and also the burden of being a natural-born PK.
The Real Thing

I can’t say that I knew where my father was when I was singing “Oklahoma,” back in high school or even as a pom-pom girl that time when the batteries went dead on the tape player during a dance routine—and “you dropped the bomb onnnnn meeeeee” suddenly fizzled across the gymnasium—creating one of my life’s most embarrassing moments. I just knew he wasn’t there and that I don’t really remember expecting him to be there, though with my mother ever present, I never remember feeling deprived by Dad’s absence.

Dad’s job was to help others. That much I understood, even as a child...